After another year of remarkable progress for Asian football, the Asian Football Confederation (AFC) celebrated the Continent’s most exceptional achievements in a dazzling 2018 AFC Annual Awards ceremony in Muscat, Oman on Wednesday.

Wang, who joined her illustrious China PR compatriots Ma Xiaoxu and Bai Jie in winning the award, said: “I would like to thank the AFC for this remarkable award. It really means a lot to win this. I want to thank my country, the Chinese Football Association and my national teammates for putting their faith in me and always encouraging me to dream big.”

Hassan, who was instrumental in Al Sadd’s march to the 2018 AFC Champions League semi-finals, added: “The true heroes are my teammates both for club and country. This award is added motivation for us to give our best each time we enter the field. And I must also thank our fans who continue to serve as an inspiration for all of us.»

AFC President Shaikh Salman bin Ebrahim Al Khalifa said: “We celebrate and applaud all our winners tonight who have work tirelessly to raise the bar each year. Asian football continues to attain world-class achievements, and this is a testament to our players, teams and Member Associations.

“We congratulate them all and all those nominated, and we thank our host the Oman Football Association and the Omani government for staging a truly memorable celebration in this wonderful city of Muscat.” 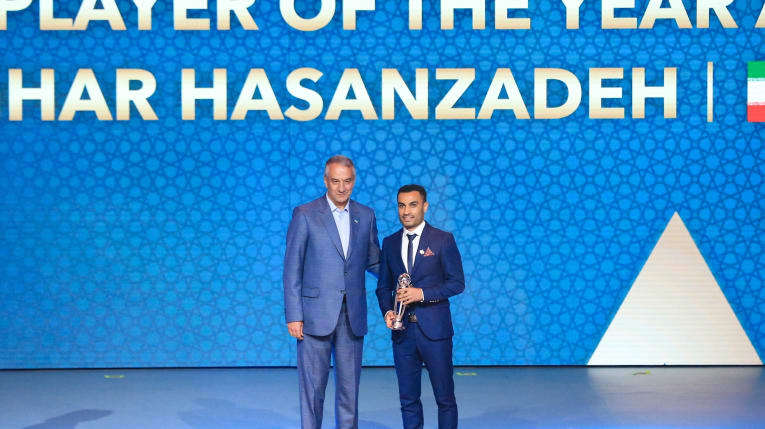 Islamic Republic of Iran’s status as a global force in world futsal was further underlined after Ali Asghar Hasanzadeh, who was part of the IR Iran side which finished third in the 2016 FIFA Futsal World Cup, landed his fourth AFC Futsal Player of the Year accolade.

AFC Member Association of the Year:

AFC Coach of the Year:

Awards not presented in Muscat:

AFC Youth Player of the Year: