Tashkent: Marat Bikmaev marked his return to Uzbek club Pakhtakor, having left the club in 2004, with the winning goal in their 2-1 win over Iraq’s Air Force Club in the 2019 AFC Champions League Preliminary Stage 2 on Tuesday.

In an exciting contest between the runners-up from the Uzbekistan league and the 2018 AFC Cup winners, 15,000 fans saw three spectacular goals shared between the two sides.

Jaloliddin Masharipov opened the scoring on 76 minutes with a wonderful overhead effort, before Bikmaev — playing for Pakhtakor for the first time in 15 years — curled in a stunning long-range set-piece.

Not to be outdone, 2018 AFC Cup MVP Hammadi Ahmed executed his own acrobatic bicycle kick with three minutes remaining to ensure a thrilling climax.

he focus after the match was on the return of the prodigal son, however.

Bikmaev, who departed Pakhtakor at 18 for a career that included 10 years in Russia and Kazakhstan before a five season stint with city rivals Lokomotiv, was delighted to be back.

«I started my football career in Pakhtakor,» he said. «From the youth academy to the first team, I spent the journey here.

«The team and fans welcomed my return very warmly.» 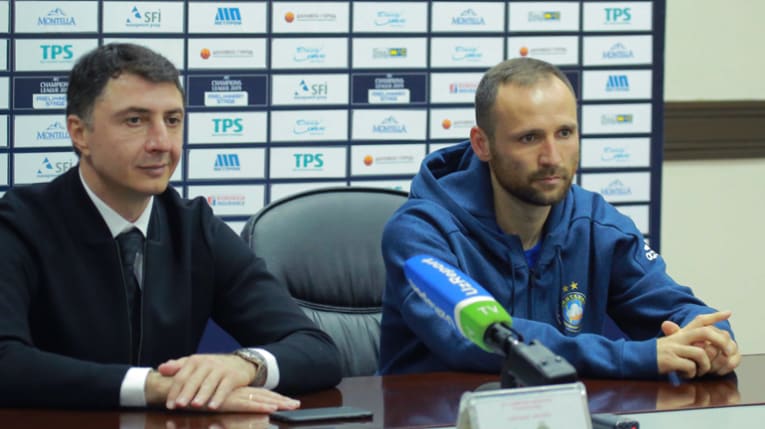 «We had many opportunities in the match against Air Force Club, but maybe we struggled a little as it was the first competitive match of the season for us.

«The most important thing was that we won and that we are into the next stage of the competition.

«I would like to give my thanks again to the fans. I am so glad they came out in numbers to support us.»

«[Jasurbek] Yakhshibaev showed himself positively as well. He tried to make the most of it today. I trust he can play even stronger. Every player tried to show their maximum level.

«Against Al Nasr [in next week’s AFC Champions League play-off] some of our players cannot play as they’ve got injuries but we have quality players to replace them such as: Egor Krimets, Bikmaev, Masharipov and Sanjar Kuvvatov.»