Despite coolly tucking the ball into the bottom corner, Dragan Ceran has admitted he felt nervous prior to opening the scoring from the spot in Pakhtakor’s 2-1 win over the United Arab Emirates’ Al Nasr that saw them progress to the AFC Champions League group stage.

After beating Iraq’s Air Force Club in Tashkent in last week’s preliminary round, the Uzbek team had to win away at Al Maktoum Stadium in the play-off round on Tuesday to secure a place in the continental competition, but when they conceded an early penalty it looked like they could face an uphill battle.

Spanish striker Alvaro Negredo missed before Serbian Ceran was handed his own chance from the spot, one which he duly accepted by guiding the ball into the bottom left corner to put his team a goal up just after the half hour.

Marat Bikmaev doubled Pakhtakor’s advantage in the second half and, although Negredo pulled one back through his second penalty of the night, it was the Central Asian side who advanced to the group stage for the first time since 2016.

“I was nervous when I hit the penalty because a few minutes earlier our opponent had missed one,» admitted the 31-year-old striker. “But I tried my best to remain calm and focus on my target.”

“We knew that it would be a difficult match, and Al Nasr have very good foreign players. It was a very hard game, but we have been trying to play well as a team and we succeeded.” 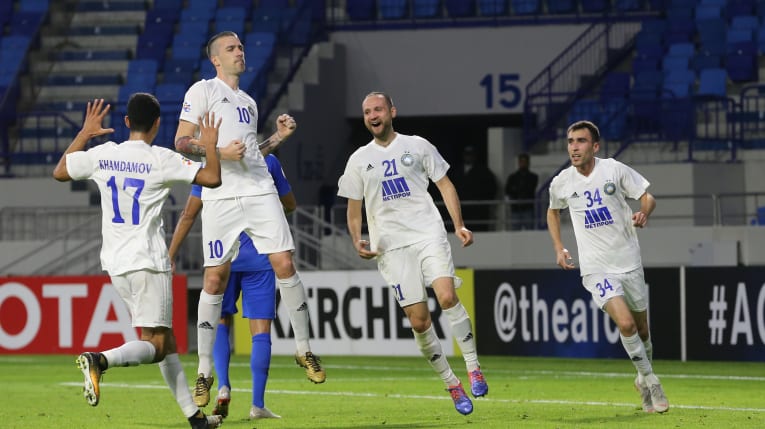 Eleven-time Uzbek champions Pakhtakor have made 13 appearances in the AFC Champions League but, after exiting at the group stage in 2016, failed to qualify in 2017 and 2018 – the latter of which they fell in the play-offs to Qatar’s Al Gharafa.

But after finishing as runners-up in last year’s Uzbekistan Super League, head coach Shota Arveladze brought in a host of Uzbek internationals ahead of the 2019 campaign.

Tuesday’s victory sees them take their place in Group D alongside last year’s AFC Champions League runners-up Persepolis, Al Sadd and Al Ahli in what is one of the toughest groups in the competition.

“Our group is very strong, but nothing is impossible,” added Ceran. “We have won two difficult games and now we will try to compete well in the group stage and win our matches.”

After leading the side back into the competition, meanwhile, Arveladze will take to the AFC Champions League stage for the first time, having previously coached sides in Israel and Turkey.

“I told players that we should win the game and go to the group stage, I am proud of them as they have shown the quality they possess,” said the Georgian coach.

“We created more opportunities than them and now we will try to go as far as possible. It was very important to get to the AFC Champions League.”