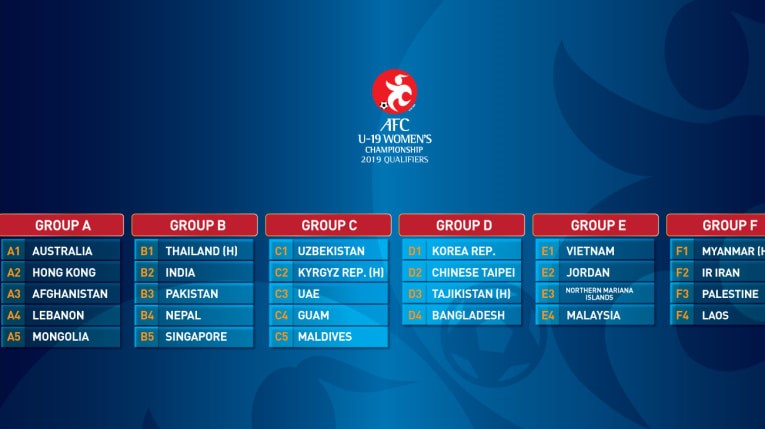 The 27 teams playing in the AFC U-19 Women’s Championship 2019 Qualifiers identified their qualifying group rivals at the official draw ceremony at the AFC House, Kuala Lumpur on Wednesday.

Japan, DPR Korea and China PR, who were the top three teams in the 2017 edition, received direct qualification to the 2019 Finals.

The qualifying campaign will consist two rounds. In the Qualifiers Round 1, the group winners from and two best second-placed teams will progress to Round 2, where the top four teams would then advance to the Finals.

Kyrgyz Republic, Myanmar, Tajikistan and Thailand have expressed interest to host the Qualifiers.

Australia, who missed out on third place in 2017 after a 3-0 loss to China PR, will face Hong Kong, Afghanistan, Lebanon and newcomers Mongolia in Group A.

Thailand will welcome India, Pakistan, Nepal and Singapore in Group B, while Kyrgyz Republic, who will host Group C, have Uzbekistan, United Arab Emirates, Guam and Maldives for company.

In Group D, Tajikistan will play hosts to two-time champions Korea Republic, Bangladesh and Chinese Taipei, runners-up of the inaugural edition in 2002.

Malaysia return to the AFC U-19 Women’s Championship since their last participation in 2006, and are grouped alongside Vietnam, Jordan and Northern Mariana Islands in Group E.

Group F hosts Myanmar will be up against Islamic Republic of Iran, Palestine and tournament debutants Laos.

Round 2 of the Qualifiers will be held next year on April 22 to 30.

The hosts and dates for the Finals will be announced in due course.