Kyrgyz Republic may be newcomers to the AFC Asian Cup, but head coach Aleksandr Krestinin believes his side are good enough to reach the knockout stage at UAE 2019.

The Central Asians are in Group C alongside Korea Republic, China PR and fellow first-time qualifiers the Philippine, but, while aware of the scale of the challenge ahead, Krestinin told the-AFC.com he is confident of a successful campaign in the United Arab Emirates.

«We understand our level, and the level of the AFC Asian Cup,» the 40-year-old explained. «We must be competitively capable, and we have everything to be able to do that.»

«We hope, step by step, to achieve our goals. The main objective for our national team is to qualify from the group, and then — again, step by step — move forward.

«Our fans already know what kind of football we play. We try to play short and medium pass, we try to play offensive football, but we also understand the level of our opponents, and we will have to apply some changes to our style of play in some of the matches, but it will be done in order to achieve the best result.»

After more than a decade playing in his native Russia, Krestinin began his coaching career at Kyrgyz Republic’s FC Neftchi Kochkor-Ata, before taking the reins of the senior national team in 2014.

Krestinin’s tenure as Akshumkar head coach has corresponded with a period of unprecedented FIFA rankings growth and a maiden AFC Asian Cup qualification, putting the former defender in direct competition with a trio of world famous coaches in January’s Continental Finals.

«There are no weak teams in the final stage and all the teams are serious opponents,» Krestinin said, reflecting on his illustrious opponents.

«We know that Korea Republic, as a participant of FIFA World Cup Russia 2018, is a very difficult opponent. China’s head coach (Marcelo Lippi) is also a world champion.

«The Philippines are new participants, as well, but it is also a strong team. We played two games with them (in AFC Asian Cup qualifying) and played well, but unfortunately we didn’t win.

«These matches are not going to be easy, but it is even more exciting. Defeating a strong team is always a pleasure. We will work hard.» 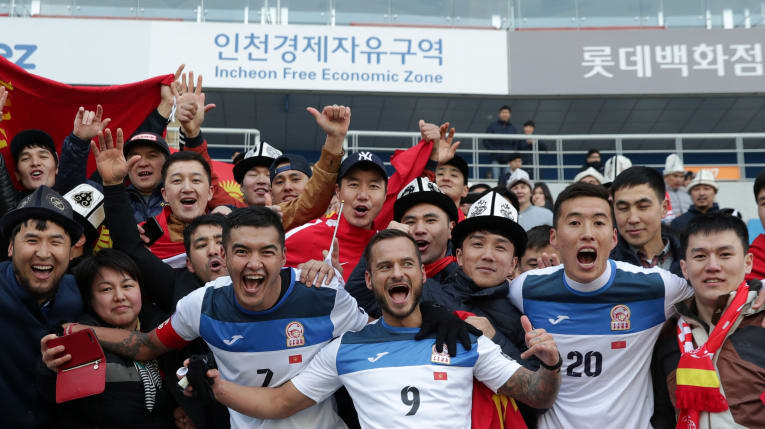 That hard work has led to encouraging results in the build-up to their January 7 kick-off in Al Ain. Kyrgyz Republic are the 12th highest ranked side in Asia, unbeaten at home in over two years, and recently earned friendly victories over the likes of Syria and Malaysia, although a 4-0 defeat to Japan serves as a reminder of the difficult task at hand.

While positive steps are being made on the pitch, perhaps the biggest impact of Kyrgyz Republic’s participation inthe AFC Asian Cup will be felt off it, with the national team’s exploits contributing to a sharp increase in support at home — something Krestinin hopes will continue to grow.

«The popularisation and development of football depend on the results and performance of clubs and national teams in the international arena, and the national team has been doing quite well,» he revealed.

«People are pleased to witness their national team’s performances, and be proud of them.»

Kyrgyz Republic’s six million-strong fan base will be hoping Krestinin’s charges will give them plenty to be proud of come January’s Finals.